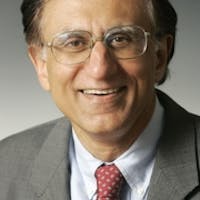 Sanjay Khosla is a Senior Fellow, Kellogg Markets and Customers Initiative (KMCI), Northwestern University and a Senior Advisor, Boston Consulting Group. Sanjay was President, Developing Markets of Kraft Foods (now Mondelez International) from Jan 2007 to March 2013, responsible for 65,000 people in over 60 countries and iconic brands like Cadbury, Oreo, Milka, Trident. During his tenure, Khosla: -Transformed the business from $5 Billion to $16 Billion in 5 years (doubled the business organically) while dramatically improving profitability and cash flow -Transformed brands like Oreo from $200 million to a $1 Billion and Tang from $500 million to $1 Billion in 5 years in developing markets -Helped spearhead and successfully integrate the acquisition of Cadbury (bought for $20 Billion) and Danone biscuits (bought for $7.8 Billion) Before joining Kraft Foods, Khosla turned around the $3 Billion consumer business of Fonterra, a global dairy company based in New Zealand. Prior to his tenure at Fonterra, Khosla enjoyed a successful 27-year career with Unilever based in the UK, Europe and India. Khosla implemented a bold program (Paint the World Yellow with Lipton) as Chairman of the Global Category Board for Unilever Beverages. Khosla also created the Wheel detergents business in India, which is one of Unileverâ€™s largest brands in India. Khosla is on the Board of Best Buy Inc, USA, Zoetis Inc USA (previously Pfizer animal health), Big Heart Pet Brands, USA and NIIT Ltd, India. Khosla was previously on the Board of Hindustan Unilever, India; Co-Chair of the Nestle/Fonterra joint venture for the Americas; and on the Board of the Lipton /Pepsi joint venture. Khosla has lectured extensively at Universities in the U.S. and in forums such as the Economist conference in London and Davos. Khosla authored a book, Fewer Bigger Bolder, with Professor Mohan Sawhney. The book discusses Focus7, a proven framework for achieving sustained profitable growth.