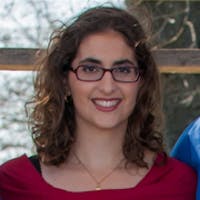 Mia Minnes is a mathematician and computer scientist. She is an Assistant Teaching Professor (LPSOE) in the Computer Science and Engineering Department at the University of California, San Diego. She researches the theory of computation, mathematical logic, and algorithmic randomness, and she develops curricula and university programs on algorithms, problem solving, the overlap of math and computer science, and writing in the discipline. Her work has been supported by several grants from the National Science Foundation. Dr. Minnes earned her PhD in Mathematics at Cornell University in 2008, co-advised by Anil Nerode and Bakhadyr Khoussainov. Previously, she earned Master's degrees in Computer Science (2006) and Mathematics (2006) from Cornell and Bachelor's degrees in Mathematics and Engineering (2003) and Philosophy (2003) from Queen's University. Her postdoctoral work was at MIT (Massachusetts Institute of Technology, 2008-2010) and UC San Diego (2010-2013). She has taught many different courses in mathematics and computer science, ranging from large-lecture introductory freshman courses to senior undergraduate and graduate seminars. She was awarded the Best Teacher award 2013-2014 in CSE in the Jacobs School of Engineering at UC San Diego.