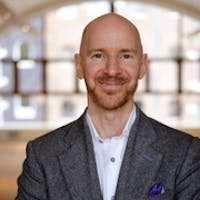 Eddie Stern is a yoga teacher, author, and lecturer from New York City. He is known for his multi-disciplinary approach to furthering education and access to yoga, as well as his teaching expertise in Ashtanga Yoga. He recently released his first solo book, One Simple Thing: A New Look at the Science of Yoga, which examines in clear and simple language the underlying neurophysiological mechanisms that make yoga an effective practice. He is the co-founder of the international Yoga and Science Conference, which bring together researchers, doctors, healthcare workers, and yoga practitioners to learn about the latest developments in yoga and meditation research. Eddie is also the co-creator of The Breathing App which guides the user in a paced breathing exercise that balances the branches of the autonomic nervous system. The Breathing App is a simple, effective tool that has been shown to be helpful in reducing stress, improving sleep, and creating deep states of calm and balance in the user. He has been participating in scientific research on yoga since 2010.