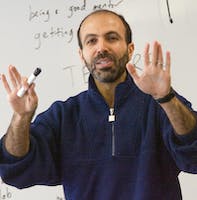 Dr. Mohamed Noor is the Earl D. McLean Professor and Chair of Biology at Duke University. His expertise is in molecular evolution, and a large part of his research has been devoted to trying to understand the genetic changes that ultimately lead to the formation of new species. More recently, his research team has used fruit fly species to understand the causes and evolutionary consequences of variation in rates of genetic recombination/ exchange. Dr. Noor has received several awards for research, teaching, and mentoring, and has been active in the scientific community, including serving as president of the American Genetic Association and the Society for the Study of Evolution, chair of the NIH study section in Genetic Variation and Evolution, and editor of the journal Evolution.