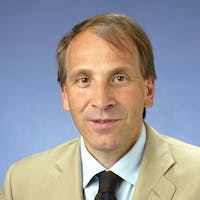 Aurelio Muttoni was born in 1958 in Faido (Italian-speaking part of Switzerland). He received his diploma in Civil Engineering from the ETH in Zurich in 1982 and his doctorate from ETH as well in 1989. His research topic was the application of the theory of plasticity to the design of reinforced concrete structures. From 1989 to 2001, he worked as partner in a consulting engineering office in Lugano. He participated to the design of several building and civil engineering structures. He was especially recognized for his innovative structural solutions. He also participated as expert in a series of offshore platform projects in the North Sea. As part of the initial teaching team of the “Accademia di Architettura” of the University of Southern Switzerland, he worked as a professor and developed the field of structures. Since 2000, he is Full Professor and Head of the Structural Concrete Laboratory of the Ecole Polytechnique Fédérale de Lausanne. His teaching activities focus on the conceptual design of structures, theory and dimensioning of concrete structures as well as bridge design. His research group is active in the following domains: behaviour and design methods for structures, conceptual design of innovative structures, punching shear of slabs, shear, bond between steel and concrete, mechanical behaviour of ultra-high performance concrete and soil-structure interaction. Starting in 2007, he reduced his activity at EPFL to found the Muttoni & Fernández consulting office (www.mfic.ch). This office is active in the conceptual design, analysis and dimensioning of load-bearing structure in architecture and civil engineering constructions as well as consulting activities in the field of structural engineering.