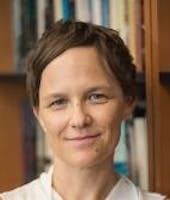 Lida Oukaderova is an Associate Professor of Film Studies at Rice University, specializing in the history of European and Russian cinema, as well as Soviet cultural history. She is the author of The Cinema of the Soviet Thaw: Space, Materiality, Movement (Indiana University Press, 2017) and is currently writing a book on ethics in Soviet and Russian film. Professor Oukaderova received her PhD in Comparative Literature from the University of Texas at Austin and her undergraduate degree in German Literature from Martin Luther University in Halle, Germany. Before coming to Rice, she taught at George Washington University in Washington, DC.