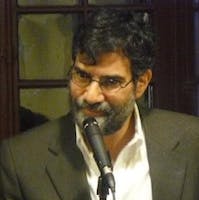 Al Filreis is Kelly Professor; founder, and faculty director of the Kelly Writers House; director of the Center for Programs in Contemporary Writing; codirector (with Charles Bernstein) of PennSound; and publisher of Jacket2 -- all at the University of Pennsylvania, where he has been teaching since 1985. Among his books: Counter-Revolution of the Word: The Conservative Attack on Modern Poetry, 1945-60; Wallace Stevens and the Actual World; and Modernism from Right to Left. He has also (with Beverly Coyle) edited the letters of José Rodríguez-Feo and Wallace Stevens (Secretaries of the Moon), and has edited and introduced a new edition of Ira Wolfert's Tucker's People. He hosts an ongoing podcast series, PoemTalk, a collaboration of the Kelly Writers House, PennSound, and the Poetry Foundation. He is currently working on a book about poetry and poetics in 1960. He has won every major teaching award given to faculty at Penn, and in 1999-2000 he was chosen as the Pennsylvania Professor of the Year by the Carnegie Foundation. ModPo is based on a course (English 88) he has taught for thirty years.