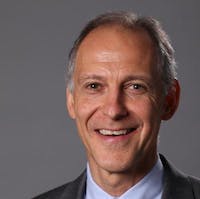 Ezekiel J. Emanuel is the Vice Provost for Global Initiatives, the Diane v.S. Levy and Robert M. Levy University Professor, and Chair of the Department of Medical Ethics and Health Policy at the University of Pennsylvania. From January 2009 to January 2011, he served as special advisor for health policy to the director of the Office of Management and Budget in the White House. From 1997 to 2011, he was chair of the Department of Bioethics at the National Institutes of Health. He is also a breast oncologist. Dr. Emanuel received his M.D. from Harvard Medical School and his Ph.D. in political philosophy from Harvard University. After completing his internship and residency in internal medicine at Boston's Beth Israel Hospital and his oncology fellowship at the Dana-Farber Cancer Institute, he joined the faculty at Harvard Medical School. He has since been a visiting professor at UCLA, the Brin Professor at Johns Hopkins Medical School, the Kovitz Professor at Stanford Medical School and visiting professor at New York University Law School. Dr. Emanuel has written and edited 9 books and over 200 scientific articles. He is currently a columnist for the New York Times. He appears regularly on television including Morning Joe, Real Time with Bill Maher, and Hardball with Chris Matthews.

The Economics of Health Care Delivery