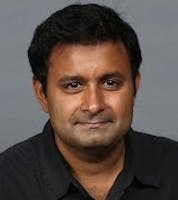 Siddharth Parameswaran joined UCI as an Assistant Professor in 2014 after spending three years as a Simons Postdoctoral Fellow in Condensed Matter Theory in the Department of Physics at UC Berkeley. He received his Ph.D. from Princeton University in 2011, as well as a B.S. in Physics and a B.A. in Mathematics from the University of Rochester in 2006. Dr. Parameswaran's research group at UC Irvine focuses on theoretical studies of strongly correlated systems where interactions between the constituent electrons, atoms, ions or molecules lead to emergent quantum phases of matter. He is particularly interested in topological phases distinguished from conventional or ‘trivial’ phases by the nonlocal nature of the entanglement encoded in the quantum-mechanical wavefunctions that describe them. Such phases could have new technological applications, including the construction of a decoherence-free quantum computer. A central theme of Dr. Parameswaran's work is to examine universal properties and experimental signatures of these phases and predict systems where they may be realized. Dr. Parameswaran is also actively involved in education and outreach, lecturing at several research summer schools and workshops, and co-teaches a Cluster entitled "Reasoning about Luck" in the UC COSMOS summer high school outreach program.