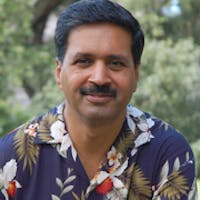 Vivek Sarkar is a Professor of Computer Science, and the E.D. Butcher Chair in Engineering at Rice University, where his group developed the Habanero Java library and programming system for use in teaching and research. He received his B.Tech. degree from the Indian Institute of Technology, Kanpur, M.S. degree from University of Wisconsin-Madison, and Ph.D. from Stanford University in 1981, 1982 and 1987, respectively. Prior to joining Rice in 2007, Dr. Sarkar worked on multiple projects related to parallel software at IBM Research for 20 years, including leading the release of the open source Jikes Research Virtual Machine for Java. His areas of expertise include parallel, concurrent, and distributed programming; vectorizing & parallelizing compilers; and parallel runtime systems. Major Works relevant to this course: ● Habanero-Java library for Java 8 ● Jikes Research Virtual Machine ● X10 parallel programming language