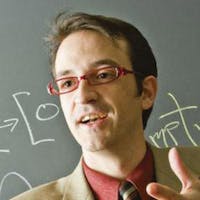 Robert Ghrist is the Andrea Mitchell University Professor of Mathematics and Electrical & Systems Engineering at the University of Pennsylvania. Prof. Ghrist is an applied mathematician whose expertise consists of finding novel applications for previously un-applied branches of Mathematics to Engineering Systems. Examples include applications of algebraic topology to sensor networks, sheaf theory to optimization and network data, CAT(0) geometry to robot motion planning, and braid theory to dynamical systems. His work has been honored by Scientific American as a "SciAm50 Top for Research Innovation" in 2007 and a Presidential Early Career Award for Scientists and Engineers (PECASE) in 2004. The S. Reid Warren, Jr. Award was granted to Prof. Ghrist by Penn students in 2009 for exceptional teaching. Prof. Ghrist is the 2013 recipient of the Chauvenet prize, the highest award for mathematical expository writing.