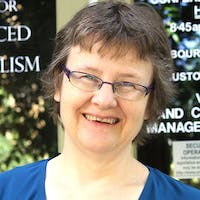 Margaret Simons is an award-winning freelance journalist and author. She is also the Director of the Centre for Advancing Journalism and co-ordinator of the Masters in Journalism at the University of Melbourne. She writes on media for a variety of media outlets, and has published eleven books. Her most recent work includes Journalism at the Crossroads, published by Scribe in 2013, and the book Malcolm Fraser: The Political Memoirs co-writen with former Prime Minister Malcolm Fraser and published by the Miegunyah Press in 2010. The latter book won both the Book of the Year and the Douglas Stewart Prize for Non-Fiction at the NSW Premier's Literary Awards in 2011. Simons published her biography of the media proprietor, Kerry Stokes, in 2013 (Penguin). LinkedIn profile: https://www.linkedin.com/pub/margaret-simons/1a/723/301