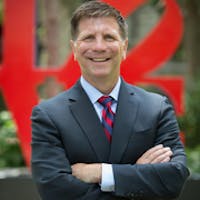 Eric J. Furda, a 1987 graduate of the University of Pennsylvania, has served as Penn's Dean of Admissions since 2008. Dean Furda has served as a higher education administrator for nearly three decades with 25 years of experience in admissions, including the position of Executive Director of Admissions at Columbia University in the City of New York from 1995 until 2004. He was appointed as the inaugural Vice President for Alumni Relations at Columbia University, a position he held from 2004-2008. Dean Furda earned a Master's degree from Teachers College Columbia University. While a student at Penn he was a four-year letterman on the varsity lightweight football team and was captain and MVP his senior year. Over his career, Dean Furda has served on or led committees for The Ivy League and the Consortium on Financing Higher Education (COFHE). He is currently on the Board of Directors for The Common Application and has served as Chair of the Board. He is currently a member of the scholarship selection committee for The Lenfest Foundation, based in Philadelphia. Dean Furda also hosts a show on college selection called The Process on SIRIUSXM Radio. Furda recently received the A. Philip Randolph Award for Diversity and Inclusion from student leadership at Penn.

How to Apply to College