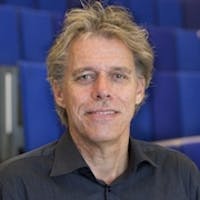 Arno W. Hoes (1958) studied medicine at the Catholic University Nijmegen and graduated in 1986. From 1987 he worked at the Department of Epidemiology & Biostatistics at the Erasmus Medical Center in Rotterdam, where he was trained in clinical epidemiology. He obtained his PhD degree in 1992. In 1991 he was appointed assistant professor of clinical epidemiology and general practice at both the Department of Epidemiology & Biostatistics and the Department of General Practice at the Erasmus Medical Center. At the latter department he headed the research line “Cardiovascular disease in primary care”. In 1996, he moved to the Julius Center for Health Sciences and Primary Care of the University Medical Center in Utrecht, where he was appointed professor of Clinical Epidemiology and General Practice in 1998. Since February 2010 he is chair of the Julius Center.