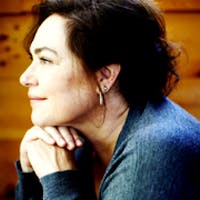 Amy Bloom is the Distinguished University Writer in Residence and Director of the Shapiro Center for Creative Writing at Wesleyan. Previously, she was senior lecturer of Creative Writing in the department of English at Yale University. Bloom has been nominated for the National Book Award and the National Book Critics Circle Award. Bloom has also written articles in periodicals including The New Yorker, The New York Times Magazine, The Atlantic Monthly, Vogue, Slate, and Salon.com. Her short fiction has appeared in The Best American Short Stories, The O. Henry Prize Stories and several other anthologies, and has won a National Magazine Award. Her sixth book, Lucky Us, appeared from Random House in 2014.